In part I of our breakdown we took a look at Liljegren's decision-making coming out of his zone and his defensive coverage. In part II we will now tackle his skating, transitions and offensive blueline play, which are some of the stronger points in his game.

One of the assets in Liljegren's arsenal is obviously his skating. Liljegren uses his skating to be a factor all over the ice and combines it with quality puck-handling when moving the puck forward as well as when trying to pull off 1 on 1 moves. He can also use his skating in defensive situations, which is where we'll start off part II of our breakdown.

EXAMPLE 1
Example 1 shows off Liljegren's ability to quickly recover backwards and close gaps down in a hurry if/when necessary. We can see Liljegren starting on the offensive blueline facing forward, yet he manages to retreat backwards and recovers towards the middle of ice in time to close down the play. More impressively, a forward pass was made by opposition in frame II, but Liljegren still managed to catch up to the play with his skating. To top it all off, in the last frame, he is already positioned for a D-to-D pass, opening himself up as an option for his partner.

EXAMPLE 2
In example 2 we have a similar sequence. In frame II, Liljegren decides to pinch up the wall in the offensive zone, however a pass by the opposition is made that starts a quick transition up the ice the other way. Through frames III to V, we see Liljegren catching up to the play. In frame VI he catches the opposition, forcing a pass to the wall. Liljegren then obtains a good position against the forward who received the puck and closes him down against the wall. While you don't want to see defensemen in position to chase the play, it is certainly a positive that Liljegren manages to execute these recoveries at a high level.

EXAMPLE 3
This sequence is another example that shows off Liljegren's recovery speed from the offensive blueline. In frame 2 he is skating backwards against the USA forward who is already positioned to explode forward up the ice. Despite having to turn, by comparing frame I and frame III, we can see that Liljegren does not really lose any of the initial gap between him and the USA forward. He ends up easily collecting the puck, skating it around the net and completing a pass. 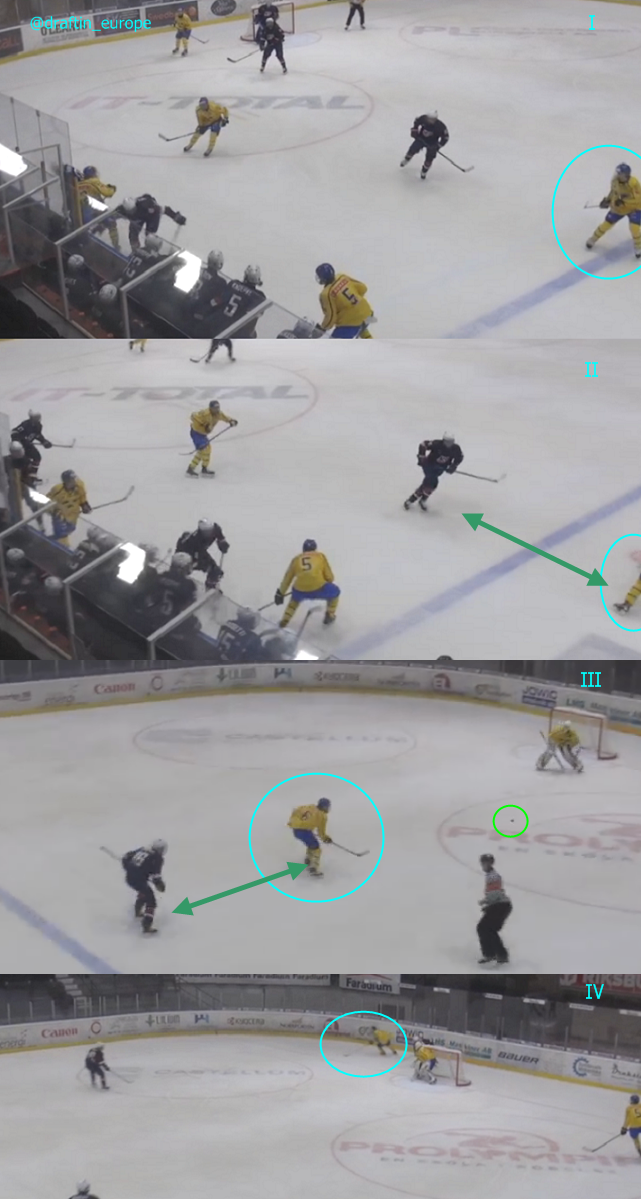 EXAMPLE 4
With example 4 we start turning towards more offensive aspects of Liljegren's game. Here we see Liljegren receiving a pass in neutral zone, entering the offensive zone with speed before he pulls off a 1 on 1 move that he finishes with a quick wrist-shot. As we will see going forward, Liljegren's wrist-shot is one of his better weapons. While the goalie in this example does a good job directing the rebound to the side, Liljegren's shots generally tend to generate juicy rebounds for his team to capitalize on.

EXAMPLE 5
This sequence shows off Liljegren's skating and puck-handling. Liljegren has the ability to quickly gain a large amount of ice by exploding forward and handling the puck through space. That said, he is still learning the limits to what he can do at a pro-level. Here, he tries to skate the puck all the way from defensive zone into the offensive zone by himself. He tries to power through the opposition in frame VI and almost succeeds however the opposing player manages to poke the puck just enough to slow it down and put Liljegren offside.

EXAMPLE 6
In example 6 we have Liljegren again easily moving across large chunks of open ice, losing his backcheck in the process. Similarly as before, he runs into opposition at the offensive blueline and can not establish control as he is surrounded by several Czech players. Interestingly, Liljegren ends up being F1 as a byproduct of the play he attempted with the puck and doesn't hesitate going on with the forecheck.

EXAMPLE 7
This example focuses more closely on what we've seen from Liljegren on occasion: he will at times end up in the play almost as if he were forward, even when he doesn't have the puck. Through the first two frames we see him bring the puck up ice. In frame III he just passed the puck to his teammate, who however struggles to control it. We can't know if Liljegren would have avoided going offside otherwise, but either way, what we see from frame IV to V is he didn't recognize immediately the risk of a turnover and took a couple of more strides forward, as if he wasn’t a defenseman. In frame V Liljegren is heading back trying to catch up to the play, as he is the Swedish player who is furthest up the ice while the puck and the play are already going the opposite direction. It's too late at that point and the play results in a scoring chance for Finland.

EXAMPLE 8
Example 8 shows Liljegren moving through a maze of bodies over the offensive blueline, which is in line with what we've shown so far. His skating ability and hands allow him to successfully gain space forward, however he will have to learn how to utilize those tools to consistently establish positive outcomes. Here he manages to go through everyone except for one Czech player and finishes the play with a backhand shot.

Not surprisingly, Liljegren's skating, hands and shot allow him to be a dangerous weapon from the offensive blueline both at even strength as well as on power-play. Despite his age, he was already used as a PP option at SHL level in our viewings and did well there.

EXAMPLE 1
Example 1 is a continuation of what we've seen before. This time, Liljegren attacks from the offensive blueline and cuts in deep into offensive zone, successfully pulling off a 1 on 1 move, making the room for his dangerous wrist-shot. EXAMPLE 2
Example 2 shows off Liljegren's offensive blueline game on PP. Liljegren walks the blueline laterally with ease and poses a double threat both with his shot as well as the ability to pass. In frames I-II we see him walking the blueline backwards, down from the left side towards the middle before opting for a pass. In frame III he comes up the blueline from the right side showing the potential to release a shot which the player in front of him has to respect, before again opting for a pass. In frame V, we see Liljegren load up for a one timer which winds up generating a rebound. Liljegren possesses both a quality slapshot (that he releases as a one-timer with ease) as well as a dangerous wristshot. In frame VI he starts walking down from the left side looking for a lane to let his wristshot go, which he does in frame VIII. As we see in the last frame, it again generates a dangerous rebound, which tends to be the case more often than not with Liljegren shooting.

EXAMPLE 3
Example 3 just reiterates what we've seen before. Liljegren starts by walking the blueline before making a pass to the wall, then looks to get open for his shot. When the puck gets passed back to him, he releases a one-timer in frame IV which generates yet another big rebound. Later in the same sequence we see Liljegren get the puck in frame VI, where he uses his lateral mobility to open up a lane while handling the puck and finds his teammate with a dangerous pass, displaying the fact that he is an offensive threat both as a shooter as well as a playmaker.

EXAMPLE 4
This sequence shows off a classic weapon of Liljegren. He receives the puck and shows off his ability to quickly move across the blueline while finding room for his shot.

EXAMPLE 5
At the start of this PP sequence, Liljegren goes digging for a puck deep into the offensive zone. He successfully retrieves the puck but as soon as he tries to move back with it he gets pressured by the second Russian forward who anticipates the chance for a turnover. However, Liljegren instantly recognizes the ensuing hole in the defensive coverage and exploits it with a quick no-look pass to the other side, from where his open teammate can set up a nice goal. This is an example of how putting pressure on him on the PP can backfire as a result of his dynamism and playmaking ability.

In this second part of our breakdown we put the focus on some qualities of Liljegren that make him a unique prospect in this year's class from Europe. Despite the fine-tuning still needed to make the most of them, especially at the next level, there is no question Liljegren's tools give him the chance to become a high-end defenseman.

We hope our extensive breakdown answers the questions we've been asked, explaining why we had him lower than others in September and why assessing his ranking may currently be quite challenging.
Posted by NF at 9:09:00 PM